One on One with…the Buckeye Battle Cry! Part 1

From time to time (read= whenever it strikes our fancy) Halftime Adjustments will go one on one with another blogger or athlete. Today we match wits with Jeff from the Buckeye Battle Cry.

Halftime Adjustments- Hey Jeff thanks for agreeing to talk with our readers today, let’s get right into it. You are obviously a big Buckeye fan, where did you grow up?

BBC- Born and raised in Canton, Ohio. I drifted a little bit (NYC, LA, Knoxville) but Canton is home.

HA- So you’re from Canton, have you been to the Hall of Fame?

BBC- LOL. More than you know. I was their paper boy for five years. Used to make it last on the route so I could tour the place after the delivery was finished.

HA- That’s awesome, we lived near there and know plenty of people that never bothered to go.

BBC- When you grow up with it in your town, it’s not as exciting of an exhibit, plus, you get tired of 200,000 tourists every August.

HA- So you went to Ohio State, did you graduate from there?

BBC- No, I left after two years and took a job in journalism.

HA- Were you a big Buckeye fan before going to school?

BBC- My dad took me to a game when I was 8 years old. I asked him if Ohio Stadium was “the biggest place in the whole world”. The sea of scarlet hooked me, and I wanted nothing more than to attend Ohio State. I returned the favor and took my daughter to a game last year for her 8th birthday. She now regularly yells “O-H” on Saturday afternoons.

HA- You gotta teach ’em the truth early. Your blog recently celebrated it’s one year anniversary. What made you start blogging, and was the BBC your first attempt?

BBC- The BBC was my first sports blog. I ran a couple political ones prior to that, but this is my first solo project with sports. I launched it so I could spout my nonsense about the Buckeyes. I never intended it to have the success it has seen thus far.

BBC- Championship game, I’m at a fund raiser watching the game (at a small country club). At halftime when it’s looking good, I vow to jump in the pool if we win. Keep in mind, it’s Ohio in JANUARY. By the end of the first overtime, the club owner convinces me not to do it, for liability reasons. Instead, the dogpile in the middle of the room was sufficient enough. That night, driving home well past midnight, the horns were honking on every street. As I drove through residential neighborhoods, there were people on the streets waving flags and hugging each other. Sights I never thought I’d see.

BBC- Here’s another quick one. For the Michigan game, I bought two bags of Tostitos (obvious reasons). After EVERY play, I’d get up from the couch, walk around the house, sit down and eat one chip. I’m superstitious like that…but then again, it worked, didn’t it?

HA- Yeah, but that and the spot on the floor behind the couch of my music minister’s house was magic.

BBC- See, you know what I’m talking about!

BBC- Freshman year, 1987. I head up with Block O to see the Michigan game in Ann Arbor. Four days before, Earle Bruce has been fired, and the community is rallying behind the coach. Our seats are front row in the end zone, and during warm-ups, Spielman has a look in his eye like he’s going to kill the first person he sees in maize and blue. We’re outmatched, but we pull it together. Carlos Snow and Greg Frey play just good enough and Bo’s defense allows more than they should have. Last play of the game, we rush the field before it’s over and nearly get a penalty. I tackle William White at the 40, and he calls me “Buckeye Brother” as we get to our feet and rush towards the sideline. On the way to the bus, we swipe a barricade horse. I still have it, and I carved the score and the date on it.

HA- Awesome story, you need to get White to sign the thing.

BBC- Beating Bo, and getting to do all that…it was almost worth John Cooper.

HA- Speaking of which, finish this sentence. John Cooper is to Ohio State football as ….

BBC- Hmmmm. Let me get back to you on that one.

HA- Fair enough. What are your other favorite teams?

BBC- Indians, Browns, Cavs. I have no other loyalties outside of OSU and NE Ohio.

HA- Other than Ohio State football, which team championship would mean the most to you?

BBC- I think it would have to be the Browns. They’ve suffered for a long time, and at least the Tribe has made it to the World Series, and the Cavs have entered The Finals. But the Super Bowl has been elusive, and a title there would be a tremendous weight lifted off all of our shoulders.

HA- I know what you mean, I think the Browns winning would do more for the city than any of the others, personally I think I’d get more enjoyment from the World Series, but that is me.

BBC- Ask me again in four weeks. We could have that answer made for us by then! 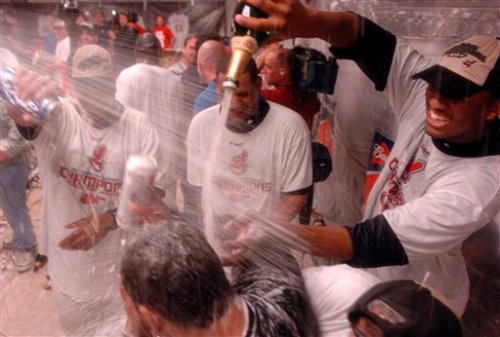 One response to “One on One with…the Buckeye Battle Cry! Part 1”