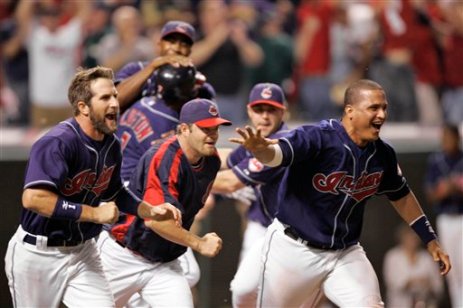 Sometimes a moment, or a game can define a season or a team. Friday night the 2007 Indians might have had that moment. By now you know the story. You watched as 23 year old Fausto Carmona pitched the playoff game of a lifetime. You saw him strike out 5 Yankees, including soon to be AL MVP Alex Rodriguez 3 times. You watched him limit baseball’s most potent offense to 3 hits. One lone home run accounting for the only Yankee to get past second base. And yet it almost wasn’t enough. 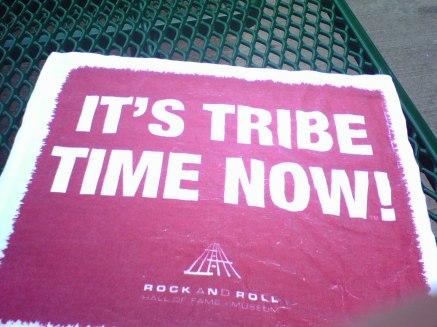 I was there, and haven’t watched a replay of the game, nor read much about it since. I say that because I’m completely unaware of what was discussed as the game was going on, though I could guess. I will say the topic of conversation in my section was pretty heavy on the Tribe’s ability to shut down the top hitters in this Yankee line-up. We watched their batting averages wither to nearly nothing. The 4-6 hitters were 0-10 in this game. They are 0-20 for the series. Throw Jeter’s 1-8 in there, and the numbers are horrific. 1-28 for the 3-6 hitters. Unbelievable. That is why it was so important for the Tribe bats to come through in the end. It would have been unimaginable for the Yankees to get a split with those kind of numbers.

But make no mistake, The Yankee pitchers were nearly as spectacular. Andy Pettitte frustrated Indians hitters and fans alike. When he got into trouble, which was often, he slowed the game to a near halt. Frequent throws to first. Multiple conferences at the mound. He was a veteran, and wiggled out of jam after jam. When the Indians failed to tie the game after Grady Sizemore’s lead-off triple there was a sense of doom lurking in the air at the Jake. Maybe that stench was what attracted the bugs.

Whatever it was that rattled Joba Chamberlain, whether the bugs, the pressure, or the Indians patience at the plate, it worked. And when that ball got past Posada scoring Sizemore in the 8th, the crowd sensed the game would be ours. It just took a little longer than we anticipated.

That’s Rafael Perez during pre-game warm-ups. After Carmona’s masterful performance was finished, the game was turned over to Perez. He was just as dominant. The Yankees didn’t sniff first base. The Indians however, were at the brink of sending the crowd into a frenzy every inning. They simply couldn’t punch through and get the run in. Numerous Indians had their chances. Cabrera had several. He didn’t get the job done. Peralta had a chance, but struck out. Hafner had chances early on, but came through with the bases loaded in the 11th. The atmosphere at the Jake? Electric, as would be expected.

Some of the best signs I saw in the crowd. Sorry LeBron Kenny is King. And Kenny Lofton has been the king of this series. He is batting .714 for the series. 2 more walks last night. How about this one- I’ve been a die-hard Reds fan for 22 years, screw it Go Tribe! Sure, we’ll take you. There’s a little room left on the band wagon. There were a lot of Vizquel, and Thome jerseys at the game though. I have to say, there are a couple of guys wearing #13 and #25 for the current Tribe, and they’re pretty good too. How about updating the wardrobes? The other sign I couldn’t remember all of, but it was one of those priceless type signs. It listed the salaries for the 3-6 hitters, and then said 0-14 priceless! Yeah, that it is! Now let’s finish this series off. I’d rather not have to have Byrd go in New York. I don’t think he matches up well against their line-up, nor in that stadium. Finish ’em Westbrook. And we’ll look back at this game as a defining moment. When we buried the Yanks!