The Cavs may have gained some confidence by winning in San Antonio. 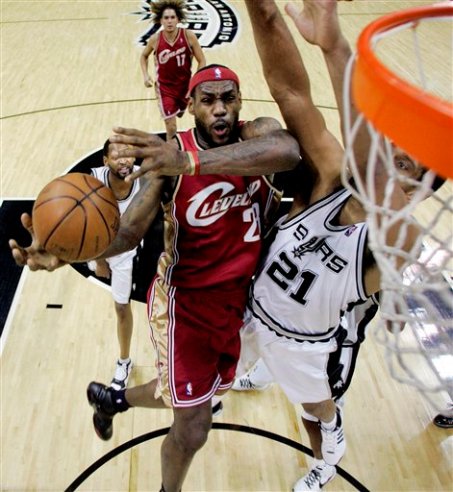 The Cavs beat San Antonio at their own game Thursday night. They shot better from the perimeter, created turnovers, didn’t allow easy baskets, and played physical basketball. In keeping with Cavalier basketball, they out-rebounded the Spurs, built a decent lead, then nearly blew it.

LeBron was merely ‘average’ on Thursday, actually slightly below his average. He finished with 27 points, 9 rebounds and 7 assists. He also had 2 great blocked shots, and a 3rd that was called goal tending. It probably was, but it was another great hustle play as LeBron swatted a lay-up from behind. That is becoming LeBron’s signature defensive move.

Zydrunas Ilgauskas was a force, scoring 17 on only 11 shots. He took over for the Cavs offensively when LeBron went to the bench in the 2nd. That group of Z, Daniel Gibson, Devin Brown, Andy Varejao and Damon Jones actually turned a 7 point deficit into an 8 point lead. They did it with great defense and team offense. Devin Brown had an outstanding behind the back pass to Damon Jones on a 2 on 1 fast break. That was set up by a steal from Andy Varejao. It was as if the Cavs knew they had to do more with LeBron on the bench, only this time instead of jacking up jump shots, they played as a team. They made the extra pass and fed Z on the low post. It was the best effort I’ve seen from the bench this year. END_OF_DOCUMENT_TOKEN_TO_BE_REPLACED

Memphis forward Mike Miller was not even a speed bump for LeBron James. 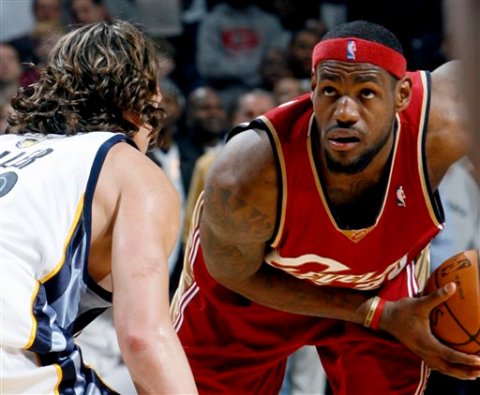 Last night the FedEx Forum reminded me of the James A. Rhodes Arena in Akron. Just like in high school, LeBron James was driving to the basket at will, defenses helpless to stop him. It was a good thing too, because the Grizzles were shooting the lights out of the place. 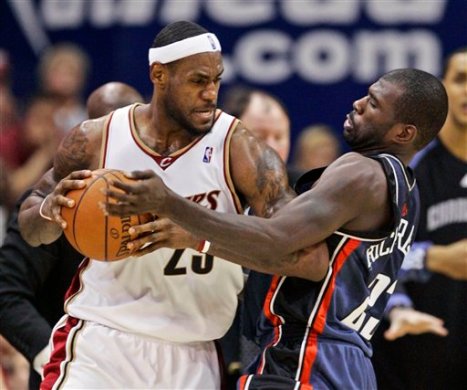 LeBron James led the Cavs in scoring, rebounding, assists, steals, and blocked shots. Yet, without a few of his teammates, the Cavs wouldn’t have pulled this one out. Andy Varejao came up big tonight, despite playing with a bruised knee and an Achilles sprain. Varejao grabbed 18 boards and scored 16 points in his 41 minutes. It was Andy that willed the Cavs back into the game in the second quarter when LeBron took a seat.

The Bobcats, and specifically Jason Richardson opened the game scorching hot. The Cavs managed to hang with Charlotte, and eventually opened up an 8 point lead in the second, as Richardson went cold. The Cavs finished the first half up 58-51. But, as has been the trend for the Cavs, they started the third quarter cold, and relinquished the lead. James, who had 13 points at the half, didn’t score at all in the 3rd frame. END_OF_DOCUMENT_TOKEN_TO_BE_REPLACED

For maybe the first time this season, the Cavs dominated an opponent from start to finish. 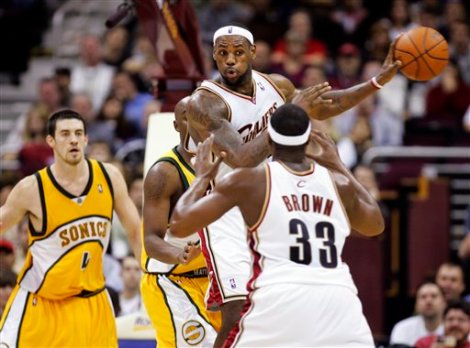 The Cavs turned up the defensive intensity and the result was an easy win against Seattle 95-79. The Cavs outscored the Sonics in each of the first 3 quarters and built a 20 point lead in the early part of the 4th quarter. This allowed LeBron and the starting group to get a little more rest than usual, as they have to play in Atlanta tonight.

Daniel Gibson shot the lights out, connecting on 5 of 8 three pointers, and all the Cavs seemed to get in on the defensive lock down. Larry Hughes made a nice steal leading to a thunderous LeBron dunk late in the third quarter. Andy was his usual hustling self, and even made a few baskets just outside the paint (if I hadn’t seen it myself I might not believe it.) Z never really got going, but with the pace was quicker with the steals and defensive pressure. The Cavs finished with 15 steals. Now honestly, the Sonics are to blame for a good portion of those. They did not handle the ball well. (There’s an understatement.)

Kevin Durant started slow, but showed promise, scoring 24 before leaving the game with a ankle sprain. He came down on Sasha’s foot I believe and that ended his night. He didn’t do anything extraordinary to impress me during the game, just played solid and knocked down some shots. END_OF_DOCUMENT_TOKEN_TO_BE_REPLACED

Hopefully that will be the headline on the season as well. 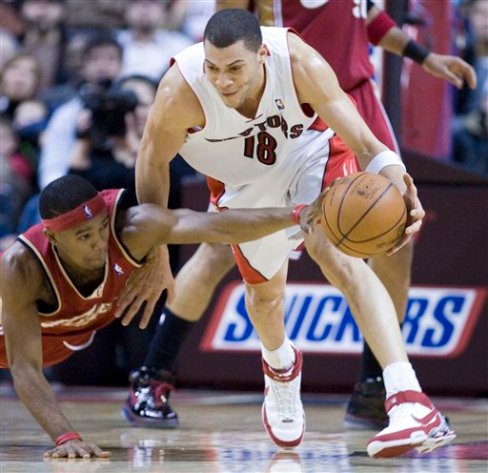 The Cavs made Jamario Moon and his Raptor teammates look like the Eastern Conference All-Star team for the first 32 minutes of Sunday’s game. Then LeBron and company decided they wanted to win the game. They did, 93-90. They won despite waiting until 4 minutes left in the game to grab their first lead. (Much to the delight of Cavs color man Austin Carr, who had been insisting for 5 minutes that Cavs couldn’t win on the road unless they managed to get the lead. Seriously, do we not have any former players that sound half intelligent?)
LeBron brought out the Superman cape apparently because he was frustrated with some female hecklers in the front row. He proceeded to score 24 points in the fourth quarter alone. Not surprisingly the Raptors focused their full attention on James, and LeBron was happy to dish to wide open teammates who actually knocked down jumpers to seal the win.
2 of those big shots came from Damon Jones, who played with intensity today. He drained consecutive 3 pointers to draw the Cavs to within 2 when James and Daniel Gibson sealed the win. Devin Brown and Andy Varejao helped with hustle and defense. The NBA is funny though, what passes as good defense when shots don’t fall, gets ridiculed when they do.
Whatever you want to call it; luck, defense, hustle, desire…the Cavs got it done Sunday. They must continue to improve, and find the right pieces to the puzzle night in and night out. What is clear is this- don’t tick LeBron off.

LeBron busts through the line of scrimmage…Touchdown! Well, what do you see in this picture? 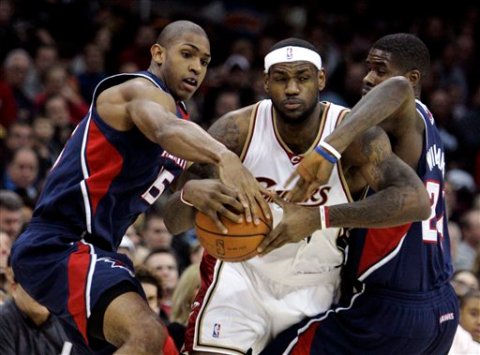 Someone might want to remind the Hawks what sport they play. I can’t say that I blame them however. At about the 9 minute mark in the 3rd quarter LeBron decided he’d had enough and the wasn’t going to lose this game. And he didn’t. To that point LeBron had only 5 points in the game, he would add 31 more, including 19 of the Cavs last 22 points. Said Daniel Gibson, “He got into one of those zones we all love, It was fun to watch.” Yeah, I’d buy that. Sort of reminded me of another such stretch, back in the playoffs against Detroit.

The Cavs as a team shot much better against Atlanta, including 6 of 10 from Larry Hughes. Zydrunas had a rough night, grabbing 5 boards and scoring only 3 points. His shot just wasn’t there, and they defended the pick-and-pop well, which is Z’s bread and butter. Drew Gooden had himself a good ballgame, and Varejao added 11 boards and 8 points from the bench. I was impressed with the balance of playing time the three big men got last night, and since Drew had the hot hand of the three, he was rewarded with more minutes. What a concept! END_OF_DOCUMENT_TOKEN_TO_BE_REPLACED

Wishing you a Merry Christmas and a Happy New Year from us here at Halftime Adjustments! 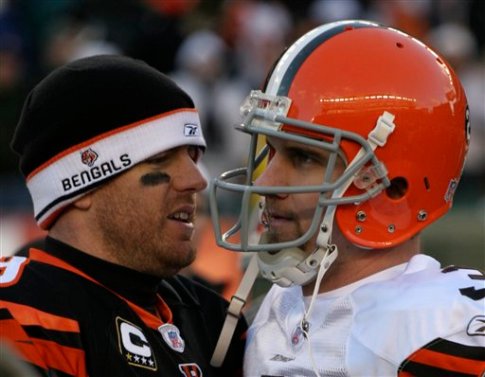 It would be too easy. I could rip the Browns, and in particular Derek Anderson for that dismal performance yesterday. I could lament how Anderson could have just cost my favorite team their first playoff appearance in years, while at the same time throwing my shot at a fantasy football title in the dumpster. Or I could write about the Cavs. I could spew venom for an hour about the Wine and Gold getting ripped on their home court last night by the Warriors. I could gripe about them never having a lead in the game. I could continue to rant about the albatross around the Cavaliers neck that is Larry Hughes.

But I’m not. Instead, I will say Merry Christmas to you. I hope that you are celebrating the birth or our savior with friends and family. I will also mention that I don’t plan on posting much this week, as I will be celebrating with my family.

If I could give Christmas presents to our favorite teams, I would give the Cavs relief from their salary cap struggles, as well as a point guard that can maximize the talent already on the roster. I would give the Browns some help on the defensive line, and turn back the clock to allow them a do over of yesterday’s game. The Indians would get an all-star left fielder, health for those with nagging injuries (Hafner) and a dominating closer. The Buckeyes would get exactly what they need- redemption in the form of a BCS title. Here’s hoping they don’t need any help from me on that one!