So what did we learn…

In my opinion not a lot. (No, I haven’t digested the whole report yet.) But here are the players that have not previously been implicated. 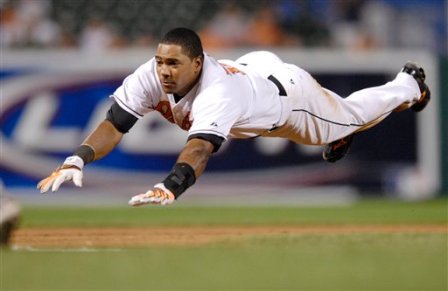 In addition to these names, we had some rehashed ones. (Clemens, Bonds, Pettite, Glaus and Sheffield being the biggest) Mitchell called for stricter testing, and no punishment for those who have been found to have cheated. Wow. Really went out on a limb there George. Stricter testing huh?

We’ll follow the reaction of the players implicated, at least the ones still playing anyway, but this report seems to have been a waste in my opinion. What will be interesting is to see the reaction from the teams that recently signed these players- Lo Duca, Gagne and the Astros who parted with six players to get Tejada.

“Several prominent Yankees” to be named

I guess that rules out Carl Pavano and Shelley Duncan.

ESPN reports today that Roger Clemens’ trainer is ratting him out. He spoke to the Mitchell investigation and reportedly gave Clemens steroids while Clemens was in New York and before. He went on to say that there will be several prominent Yankees named in the report.

Perhaps it is only a coincidence that Alex Rodriguez saw his contract finalized yesterday. Maybe A-Rod was nervous about being named, and wanted his deal done quickly, so he went around Boras to get the deal done. Then again, if this Yankee trainer was looking to cash in this morning, and he had supplied A-Rod, that would be the bigger bombshell.

So far, in all the guessing games and lists floating around the internet there have been no Indians aside from Betancourt and Byrd, who both had tested positive before. Rafael served his suspension, and for the record denies that what he took was any type of steroid. We’ll have to wait and see like the rest of the country.

Here is an excellent recap of players that have already been linked, tested positive, or admitted to using steroids or HGH. That list totals 64 players. If the Mitchell report contains only these names… what a waste of everybody’s time.

For those who are baseball fans, tomorrow is poised to be a flurry of information. The Mitchell report, now in the hands of Major League Baseball, is expected to be released Thursday. Would it surprise me if one of the major media outlets got their hands on it early? Of course not. But everyone will have access when it is released.

I’m usually not a Howard Bryant (ESPN columnist) fan, but his story about the Mitchell report is must read if you are interested at all in what will happen after the report is released. I warn you, it is a long read however. My favorite part of that piece is this-

While much of the emphasis regarding steroid use has focused on West Coast teams such as Oakland, San Francisco and San Diego, three players who admitted to using steroids — Canseco, Jeremy Giambi and Paxton Crawford — spent time with the Red Sox. Another, the former American League MVP Mo Vaughn, admitted that in 1998 he used Pro-HGH, an oral form of human growth hormone. In 2000, Boston police found steroids and syringes in a car owned by shortstop Manny Alexander that had been loaned to the team batboy.

I have written before, and make no apologies for the fact that I am openly rooting for a dozen Red Sox players to be named here. Including MVPapi himself. But seriously, do you think Mitchell will allow that to happen? According to this ESPN report, there will be 60-80 player names in that report. With that many players, we would have to assume that nearly every team will have someone represented. Though some teams might escape, seeing as how California labs and the Mets clubhouse attendant seem to be major players in the report. You would think that an AL Midwest team like Kansas City might escape scrutiny, but then they go and sign players that have already tested positive. After the jump, fun with the Mitchell report scoreboard!