It was the kind of thing you hate to see happen in a blowout win. RB Chris Wells went limping to the sideline during the Buckeyes first possession of the second half, leading 45-7. He did not return to the game, but Tressel’s report after the game was that Chris could have returned to the game, but wasn’t needed. Whew. 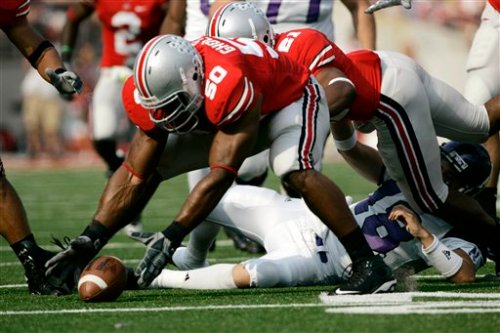 As for the game, it was over long before Wells limped off the field. The Buckeyes came out of the tunnel and absolutely dismantled the under-powered Wildcats. In all fairness to Northwestern, their best player, Ohio native and star running back Tyrell Sutton was a pre-game scratch. The rest of the offense was a scratch too, they just didn’t know it. The Ohio State defense knocked them into next week. Already up 7-0 on touchdown pass from Boeckman to Robiskie, James Lauriniatis made his presence known with a sack on third and eight. The offense would score again in three plays on yet another TD pass to Robiskie. END_OF_DOCUMENT_TOKEN_TO_BE_REPLACED